Click on the logos to read more about some of our passionate cheese makers from around New Zealand.

The cheesery is adjoined to the milking shed so there is no need for milk transportation. The fresh milk is pasteurised and then turned in to cheese the next morning.

Two of the Rosevear’s other sons, Jesse and Jake, along with cheesemaker, Tony, are constantly working on improving the cheese making and maturing technique to achieve the finest quality artisan cheeses. 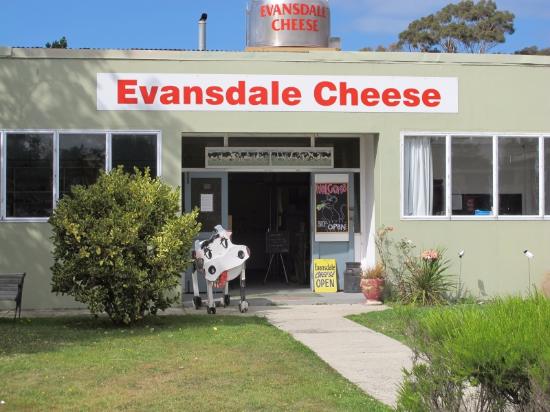 Evansdale Cheese started in 1978 with the Dennison family cow. Now Evansdale cheese is still a family owned and operated business, which has grown from 150 litres of milk a day to 1,500 litres of milk each day.

A lot has changed since Evansdale first started, but Evansdale Cheese continues to be a small, family run business, and the Dennison family members continue to make cheese by hand, recognising that with a little care and consideration, something beautiful, delicate and delicious can be shared and enjoyed by many.

Evansdale Cheese now produce 20-30 different varieties of cheese that are naturally preservative and calf rennet free. With a wide range of robust and delicate flavours; from curds to blue, to hard cheeses, and soft brie cheeses.
100% New Zealand owned and operated, you can visit Evansdale Cheese and the Dennison family cheese factory at Hawksbury village, just outside of Dunedin. Master cheese maker Albert Alferink is of Dutch heritage and has been making cheese in Mercer, one hour south of Auckland, since 1981.

Having learned how to make cheese in his homeland of Holland, Alfred came to NZ where he was working on a farm in Paihiatua when he decided he would start his own business making cheese.

Today Alfred makes over fifteen types of cheeses in his Onewhero based cheese factory with many going on to win awards at the New Zealand Cheese awards.

The milk for Alfred's vast range of hard Dutch style award winning cheeses is sourced from the surrounding area, so that all the cheeses he produces are a reflection of the lush North Waikato dairy farming region.

Together with partner Ineke who manages the retail store, Mercer Cheese not only produces mouth watering traditional European style Gouda's, Maasdam's and Pecorino but also produce flavoured cheeses utilising local ingredients such as Horopito, Kawakawa, and black truffle. Albert's cheeses would easily compete on flavour and creaminess with some of the best cheeses from his original homeland. 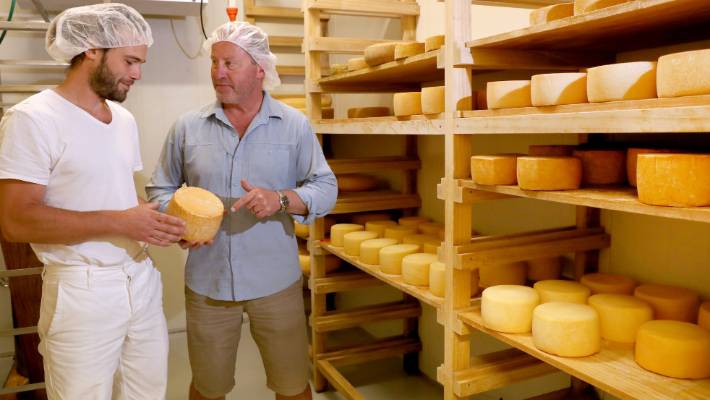 Nestled in the charming Neudorf Valley, among green rolling hills with the magnificent backdrop of the the Mt Arthur range, Thorvald cheesemaker Francis Bigot crafts delicious sheep milk yoghurt and cheeses under the Thorvald banner and more recently A2 cow's milk cheeses under the Little River Estate label.

Francis (a French national) learned his craft in his native country based near the French - Swiss border. After completing his antipodean journey, Francis was based at Nelson's Wangapeka cheese before being given the license to create sheep's milk cheese creations with Thorvald.

The highest quality sheep's milk from Canterbury's rolling plains is delivered weekly, along with regular deliveries of Oakland's A2 certified cow's milk. Francis and his team take the raw ingredients and craft hand made artisan cheeses 5 days a week.

Oaklands, have a keen focus on ethical farming practices, and have been involved in the Nelson community for over 100 years.

Aged on site for up to 3 months, some cheeses for even longer, Thorvald and now Little River Estate produce a range of award winning soft and hard cheeses, as well as fresh cheeses and yoghurts.

Started by cheesemakers Daniel and Sarah Jenkins in 2011, Kaikoura Cheese has quickly established itself as a quality producer of exceptional goat's and cow's milk cheeses.

Starting out with just 3 Sannan goats in their herd, Kaikoura Cheese has come from humble beginnings, but has managed to keep its close links with their lush surrounds first and foremost in their cheese making. Situated in the north east of the South Island, Kaikoura Cheese benefits from the unique environment where the hills come down to meet the sea and encourage unique flora to grow, ideal for making delightful, tasty and funky cheese.

Daniel and Sarah's philosophy to cheese making is french inspired but places the highest emphasis on respecting and reflecting the land and their animals which produce the milk that allows Kaikoura Cheese to produce texturally delicate and flavourful cheeses. Embracing a co-operative rather than controlling relationship with nature, and using the best quality ingredients, they say, is the secret to producing the best cheeses. Just north of Palmerston North you will find the picturesque Pohangina Valley, and the home of Cartwheel Creamery. Started in 2011, by husband and wife team Adrian and Jill Walcroft (both former scientists), Cartwheel Creamery is the result of a decades long passion for cheesemaking.

Cartwheel Creamery sources milk from a local Pohinga Valley farm who farm Jersey-Cross Cows, and from nearby Saanen Goats, Friesan cows and specialty A2 Beta-Casein milk producing herds. The milk is collected fresh before being crafted in to hand made cheese at Cartwheel Creamery's bespoke premises situated on their lifestyle block in the Manawatu.

Having spent a year living in France, the Cartwheel creamery cheesemakers embrace the concepts of terroir and provenance in their cheese making. With a scientific background, and an appreciation for fine food, Cartwheel Creamery could be described as the harmony between science and art. And it's a combination that has led to some of the best artisan cheeses produced in New Zealand.

Cartwheel Creamery produce a range of soft, blue and semi-hard and brined Goat's and Cow's Milk cheeses and are regular medal winners at the New Zealand Champions of Cheese awards.

Over The Moon Dairy The highest quality ingredients produce the highest quality cheese, and when Sue Arthur and Neil Wilman were searching for a site for their new artisan cheese enterprise there was no better place to find some of the best dairy products than the South Waikato. Putaruru, with its rolling green hill surrounds, ample rainfall and perfect grass growing conditions, is an oasis where farmers can nurture their herds with ideal nutrition and conditions to deliver milk high in fat solids to be turned in to flavour packed cheeses. Just south of the internationally acclaimed wine growing region of Martinborough some of New Zealand's best vineyards call home, Amanda and Lindsey Goodman hand rear a small herd of Saanen and Nubian goats on their idyllic block in the Wairarapa.

Originally starting with just 25 goats in their herd, after diversifying their sheep and beef farming operation, their goat herd has now grown to over 175 milking nanny goats, as they have seen demand for their fresh goat's milk cheeses soar.

The Goodman's herd of goats are treated as part of the family, and are fed with a varied diet of grass, grains and crops. This produces a freshness in their milk which translates in to the clean vibrant palate of their cheeses.

It was Amanda's passion for goat rearing and a desire to make fresh Goat's cheese for the local Wairarapa market that led the Goodmans to engage in building their bespoke cheese production facility in 2015. Amanda trained in cheese making locally and continues to experiment with techniques and flavours to produce a reflection of Wairarapa in every cheese.

Amanda and Lindsey's passion and persistence has led to industry accolades including their Black Tie ashed goat's cheese recently being awarded the Supreme Cheese Winner at the 2019 Champions of Cheese award.

Just south of Auckland on the shores of the Hauraki Gulf is a farm unlike any other in New Zealand. True pioneers of the buffalo farming scene locally, Richard and Helen Dorresteyn own and operate 200 head of buffalo and were the first to farm buffalo in New Zealand in 2007. They are a family-run business, and collectively produce award-winning fresh buffalo mozzarella, bocconcini, ricotta, yoghurt and marinated buffalo cheese. Winners of multiple awards and gold medals at New Zealand’s national cheese and artisan product awards, Clevedon Valley Buffalo Co are producing some seriously good cheeses that must be tried.

Pure white buffalo milk is A2 and contains significantly more protein and calcium than cow’s milk. It has roughly half the cholesterol of cow’s milk. Those who are intolerant to other dairy products often find buffalo milk readily digestible.

Simon and Hellene Lamb, cheesemakers at Cranky Goat, have been producing  excellent fresh and aged Goat's milk cheeses since 2014 from their property in the picturesque Marlborough Sounds. Sourcing their Goat's milk from neighbouring farmers, the Lamb's employ traditional French cheesemaking techniques to craft a range of cheeses that utilise local ingredients. Being situated so close to the world renowned Marlborough wine region, Tasman fruit bowl, and abounding water of the Marlborough sounds there is no shortage of inspiration in terms of tastes, and food combinations.

During a lengthy career in the military Simon began cheese making as a hobby, utilising goat's milk from a neighbouring farmer. Over some years of experimentation, research and learning, Simon transitioned to focussing more on his cheese making. The years of experimentation have paid off, with Cranky Goat regularly winning awards at the New Zealand Champions of Cheese awards. With daughter Hannah, now helping out with sales and marketing, Cranky Goat has become a real family affair. Annie and Geoff Nieuwenhuis have lived in the Hawkes Bay for over 30 years working in animal health and agriculture. This wealth of experience and respect for the land exhibit in a range of superb Goat's cheeses produced under their eponymous business.

Annie and Geoff leave nothing to chance in delivering the truest reflection of their terroir, managing and milking their own herd of Anglo-Nubian, Toggenburn, and Saanen goats with a keen focus on sustainability and preserving the characteristics of their land.

The limestone punctuated green hills of the Hawkes Bay provide the perfect environment for Annie and Geoff's goats to play and thrive and produce milk imbued with the flavour and characteristics needed to make award winning cheeses. The milk collected from their goats is transported straight in to their onsite creamery where Nieuwenhuis then hand craft a variety of soft, hard and brined cheeses. Their cheeses are aged on site and then sold to cheese lovers as they become ripe.

Nieuwenhuis cheese, much like the wines of Hawkes Bay, reflect their surroundings, seasonality and climate, with a depth of character only achieved through hand crafted production with the highest quality ingredients. Flag bearers of the raw milk cheese movement in New Zealand, Chris and Jill Whalley have been crafting a small but high quality range of New Zealand artisan cheese from their Katikati base just north of Tauranga in the sun drenched Bay of Plenty for over 10 years.

With cow's milk sourced from a local Jersey-cross herd, the Whalley's cheese making technique is driven as much by science as it is art. Chris originally trained as an industrial chemist, and his knowledge of the elemental world provided the perfect base for his traditional cheese making training at renowned cheese makers in Wensleydale, UK.

Shifting to New Zealand in 2007 to Jill's childhood home in the Bay of Plenty, provided the ideal location to create traditional British style cheeses including Red Leicester, Aged Cheddar and Stilton like Blue's with a New Zealand twist. The recipe of technique, science and high quality ingredients have led to several awards for their passionately crafted cheeses.